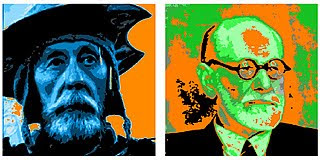 A large-format color printed visual essay describing the aspects of the late 19th/early 20th century American political and social milieu which led to the antimodernist reaction to modernity.

Describes the way that this reaction was centered on the educated elite, or bourgeois classes, and how their reaction to modernity in turn created a ground for the inception of an American field of medieval studies.