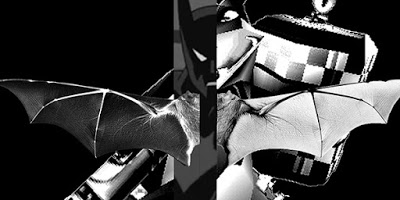 The title derives from a Batman series of the same name in the 90’s, which was pretty wild in its exploration of character. I draw from that in this collage by composing Batman with a variety of figures from various franchises.

Normally I stray away from this genre of collage, focusing mainly on illustration and printmaking, however I felt compelled to fire up Photoshop and make something nasty cool. A majority of my art can be characterized as having an antagonastic feel, constantly exploring the darkside or the concept of the “anti.”

Shadow of the Bat - Andrew Villanueva