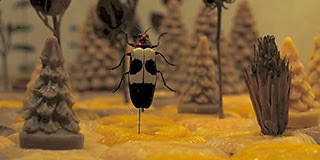 The purpose of this project is to showcase the media of insects in their use in design patterns and art installations.

A stop motion animation film is a succession of images at a high speed, of a certain object or objects to make it appear as if it is performing an action. The concept of the film is a lonely beetle getting engulfed in a dark forest. After choosing our “actor” we storyboarded the scenes and captured images of each movement. The final part was editing the images and adding a soundtrack. In creating this film, a rare media and art form were demonstrated to gain new appreciation and recognition.