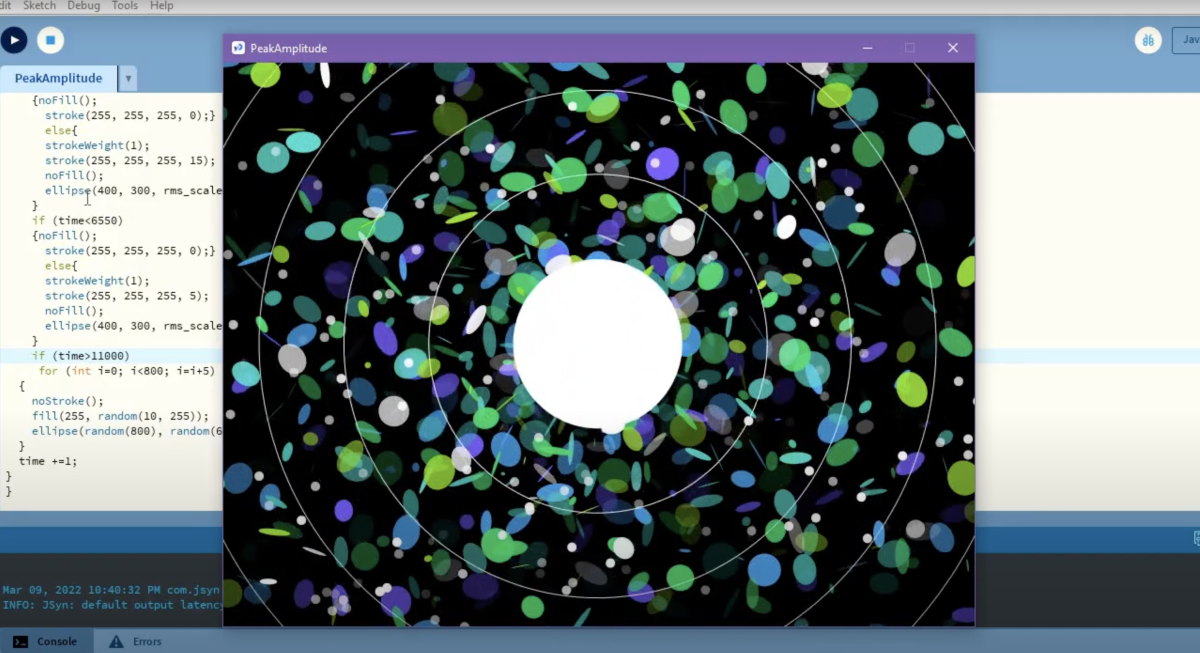 DESCRIPTION:
On the technical side of this piece, I used various processing features to achieve my final interaction. By using an amplitude analyzer in order to find the rise and fall of the music, I created a moving visual using the concentric circles to show the pace and loudness of the music. Likewise, using time as a variable for this interaction, I chose to time each concentric circle with the first part of the song, so that the effect of building up as the song continued would be demonstrated. Likewise, I included more visuals as the violin was added to the piece so that the visual would change over time. This code was then displayed using Processing by Casey Reas and Ben Fry, and Sound Library by Audio Input.

ARTIST’S STATEMENT:
My work, titled “Snow Song” was part of a series of works that focused on computational and generative design using Processing. This work explores the softness, coolness, and unpredictability of a late-night snowfall. The sound interaction, using Ryuichi Sakamodo’s composition “Merry Christmas Mr. Lawrence” helps to pull the viewer in as the piece gradually becomes more fast-paced and louder as time goes on, mimicking the pace of a late-night snowstorm, beginning with the soft notes of a piano, which give way to an accompanying violin, eventually avalanching into a full and chaotic conclusion of the two instruments. The feeling of a late night snowstorm is also demonstrated in the color choices, the shape choices, and the different opacities of each circle in my piece as well. The colors are all cool colors, white, or black to give the effect of a nighttime snow storm. The shapes, all circles, represent the softness of snow as well as the way it falls, with circles looking as if they’re twisting and overlapping.