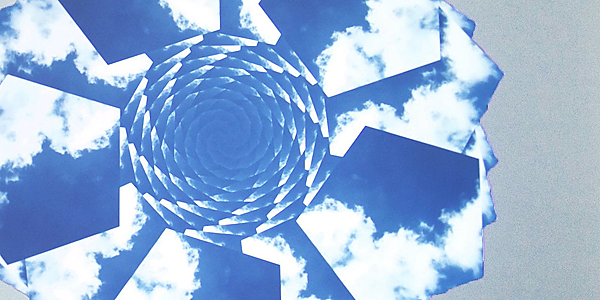 Nothing But Blue Skies combines drone footage with audio sourced from Blue Öyster Cult’s 1976 song, “Don’t Fear the Reaper” in a fractally recursive cloudscape abstracted into pentagonal forms.  The work stems from two parallel lines of research. In 2013, Zubair ur-Rehman, a 13-year-old Pakistani boy whose family was killed in a drone strike, testified before the Unites States Congress that he “no longer loves blue skies” because “when the sky brightens and becomes blue, the drones return and so does the fear.” Four years later, a U.S. military drone inexplicably lost connection with its ground crew during a test flight and was found 10 days later, crash-landed, 600 miles away from its original launch site.  Nothing But Blue Skies presents a Jungian “inner image” of the final flight of that drone—as if it decided not to carry out the mission for which it was being trained, and instead, chose to reclaim the innocent bliss of a blue sky. Through depicting this self destructive, yet ultimately liberatory act, the work asks viewers to consider: what if autonomous machines eventually become more ethical than the humans who design them?