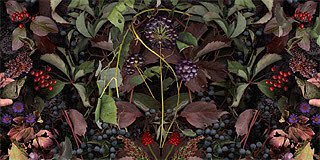 “The Pattern that Connects”

A theorist of evolution, Gregory Bateson, writes about pattern: “What pattern connects the crab to the lobster and the orchid to the primrose and all the four of them to me?

And me to you? And all the six of us to the amoeba in one direction and to the backward schizophrenic in another?”

I am working on a project involving the creation of large scale wall-coverings that focus on the development of pattern from my photographs and scanographs of nature imagery. My artwork is influenced by my professional background as a textile designer. I build compositional armatures for my patterns that are often based on the layout of an historical textile document. In particular I return to the work of 19th century designer, William Morris, for inspiration and study. A founder of the British Arts and Crafts movement, Morris had a “knowledge, understanding and love of all natural things – flowers, trees, insects, animals and birds – and used this material with the authority gained from observing nature at first hand”.

Being in the woods almost daily with my camera, the activity of taking pictures makes for a visual diary – it illuminates my relationship with the natural world and documents changing evidence of the ordinary and the astonishing. Season after season I rely on nature’s comforting repetition – the familiarity and security that comes from knowing – seeing! – that soon after the appearance of the jack-in-the-pulpit comes the anticipated morel and the resulting mushroom risotto. This creates the true “pattern” of my work: the inter-relationships between all of nature’s corresponding parts where one thing begets another, one day becomes a year and then two, always with the milkweed silk fleeing their pods at the same time that the geese honk noisily along their relocation paths. This personal, arbitrary, asymmetrical time chart is deeply resonant for me and key to my understanding of what it means to be alive and of this world.

My patterns are constructed from these daily snapshots and from scanographs composed in my studio. Combinations of motifs are “sewn” together through extreme image layering and masking in Photoshop. Often working with over 100 layers, a photographic grouping is created and then given a “repeat” structure – a textile design term referring to the way a pattern is set up to tile seamlessly in any direction. There are a range of established repeat formats that I employ including the “half-drop” and the “mirrored image”(which creates a rorschach-like effect). The ability that my patterns have to endlessly tile creates the potential for multiple size works ranging from large individual prints to full room installations.

The subject material I work with includes wild mushrooms, nests, woodland plants, wetland wildflowers and in winter, icicles and frost. The animals I include are either photographs of taxidermy or are live subjects that happen to cross my path. I choose to focus on natural elements that are not commonly appreciated or used for decorative purposes. As an example, seashells and acanthus leaves have been used throughout history as source material for the ornamental embellishment of architecture whereas the delicate, copper-lined Turkey Tail mushroom that I love to rediscover goes quietly without notice. It is my intention that my visual meditation on the changing natural world charges and re-charges my photographic work with a wonder that is transferrable to the viewer.