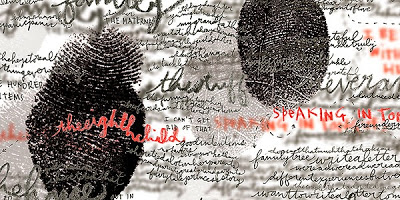 ‘Lost Daughters’ visualizes how conversations that I had with four strangers about their personal lives overlap, intersect, and diverge. By chance, these four discussions – all with women – focused on the topic of adoption: being an adopted child, being an adoptive parent, searching for or finding birth parents, and so on. I drew and diagrammed the conversations as we had them. Using that source material as well as fingerprints taken from each my interview subjects, I created this piece. It is one in a series of ten digital prints, titled ‘Charming Interrogation,’ which is based on one-on-one exchanges I shared with thirty people for a performance work, titled ‘SPILL.’

Over many cups of coffee and the course of four months, I gave thirty, one-on-one performances in Cafe Zoma, as part of Spatula&Barcode’s ‘Café Allongé’ series commissioned for Madison Museum of Contemporary Art’s ‘2013 Wisconsin Triennial.’ / / In my follow-up print series, ‘Charming Interrogation,’ gleanings from those conversations were reshaped into cryptic, cursive text drawings and computer-mediated prints. Strangers’ stories were returned to the site where their telling took place and exhibited there for a month. / / My performance piece, ‘SPILL,’ was one of sixteen pieces by different artists that ran from September-December 2013 in coffee shops all over Madison. Each performance was given for an audience of one. Curious Cafe Zoma patrons often eavesdropped on ‘SPILL’ as the work unfolded at a table in the very center of the space. / / The piece invited audience members to pour their hearts out over a cup of coffee. It played with the push-pull needs of privacy and disclosure. We want to have our stories heard but sharing them makes us vulnerable. To take that risk is often difficult and scary but can also be rewarding and beautiful. ‘SPILL’ and the ‘Charming Interrogation’ print series explore all of that. /