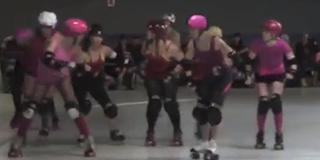 Roller derby had its beginnings as a co-ed skating endurance competition but virtually disappeared at the end of the 1970s after falling prey to the exploitative and outrageous production antics of televised roller derby. Roller derby made a comeback in 2003, which jump-started the formation of roller derby leagues all over the world. Since its revival, roller derby has evolved into a highly athletic and competitive sport. However, shadows of what roller derby once was still linger. Through personal interviews with skaters from the Mad Rollin’ Dolls, the women’s flat-track roller derby league of Madison, Drafting Derby attempts to shed light on the evolution of roller derby as an empowering and athletic sport for women, as well as delve into the creative aspects of the derby culture such as derby names and uniforms.