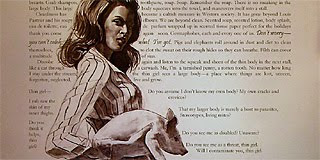 I created this project as a response to an assignment Professor Jon McKenzie gave while I was in his English 481 class.

The project is modeled after several works we read in class, notably Marshall McLuhan’s “The Medium is the Message.” In the project, I attempted to dissect a portion of my identity that I have never before examined–living as an overweight woman in (specifically American) society. I look at the transgressive roles that fat women inhabit based on patriarchal standards of worth, value, and goodness. I also consider how fat and female–though seemingly mutually exclusive–attempt to reconcile in my own body. The theory of Susan Bordo and the extraordinary artwork of Garry Hobbs have also greatly inspired this project.