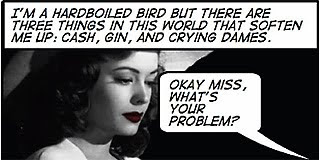 In my project, I have aimed to explain the concepts of numeracy, dataveillance, and the algo-numeric double through a story that contains aesthetic and narrative conventions of film noir.

The title of my comic as well as the choice to have traces of red throughout the piece is a play upon Shakespeare’s famous line, “A rose by any other name would smell as sweet.” My work explores this quote, or more specifically, whether or not being defined by a number and associations with one’s name effects identity in the modern world. While Shakespeare asserts that only being, not name, matters, I suggest in that name and number are greatly significant in that they are intrinsically linked to, and influence being.

The character Rosie hates the Information Age and believes that her digital traces overwhelm her real identity. As Detective Ace attempts to solve her case, the characters and readers learn concepts from the helpers along the way. Shakespeare asserts that name does not matter, only being but the ultimate statement of A Rose by Any Other Number is that name and number do matter in that they are intrinsically linked to being. Rather than diminish one’s identity, a data body and signature are part of one’s identity. Deleting them is nearly impossible and would result in removing oneself from the context of society. The hackers’ statements provide realistic solutions and the last frame of the comic, in which Rosie disappears and leaves a slip of paper that says, “Call me, 6309277327” expresses her acceptance of their sentiments. On a literal level she asking the detective to phone her, but metaphorically she is calling herself (and defining herself by) a number.