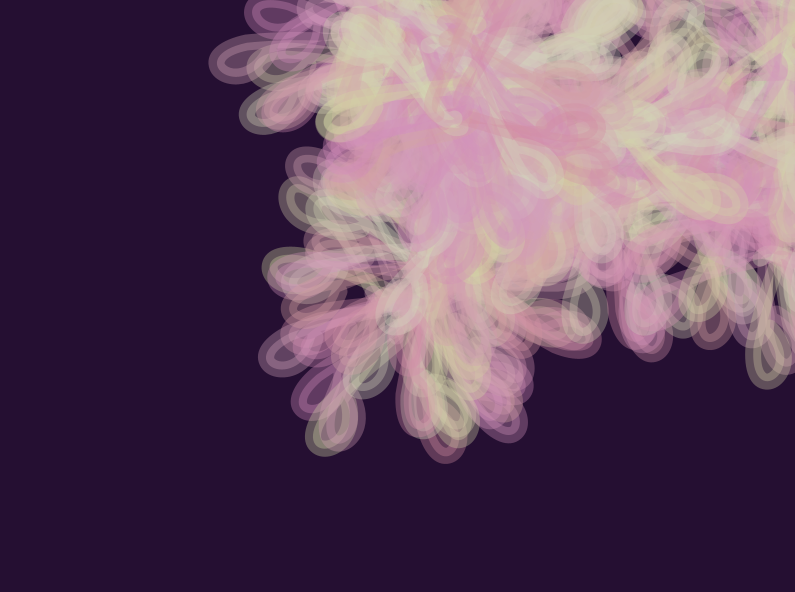 DESCRIPTION:
Symbiosis is a program that creates computer generated images with input from a microphone. It displays a figure resembling a neuron at first, though with an increase in volume the figure becomes more of a flower. The piece itself describes the importance of using your voice to create something beautiful and how computers can play a role in aiding us to bring our ideas into our physical space. Everything is generated in real time and no two generations are the same, meaning on each instance of the program itself the prominent neuron-esque figure will be unique.

ARTIST’S STATEMENT:
Symbiosis is meant to visualize volume in our voice through a vaguely organic mass resembling a neuron. The colors of Symbiosis change with how loud the user is, eventually becoming redder and resembling less of a neuron and more of a flower with an increase in volume. This piece is meant to encourage users to use their voice to make something beautiful and vibrant, and given the neuron symbolism, specifically something beautiful from our ideas that remain dormant in our brains, starved of any existence in our shared physical space. In truth, the piece being generated from code is more than personal accessibility, but rather a reminder of how useful computers can be in the creative process. The title, “Symbiosis”, is a reference to human-computer interaction, though in the sense of human-computer symbiosis.